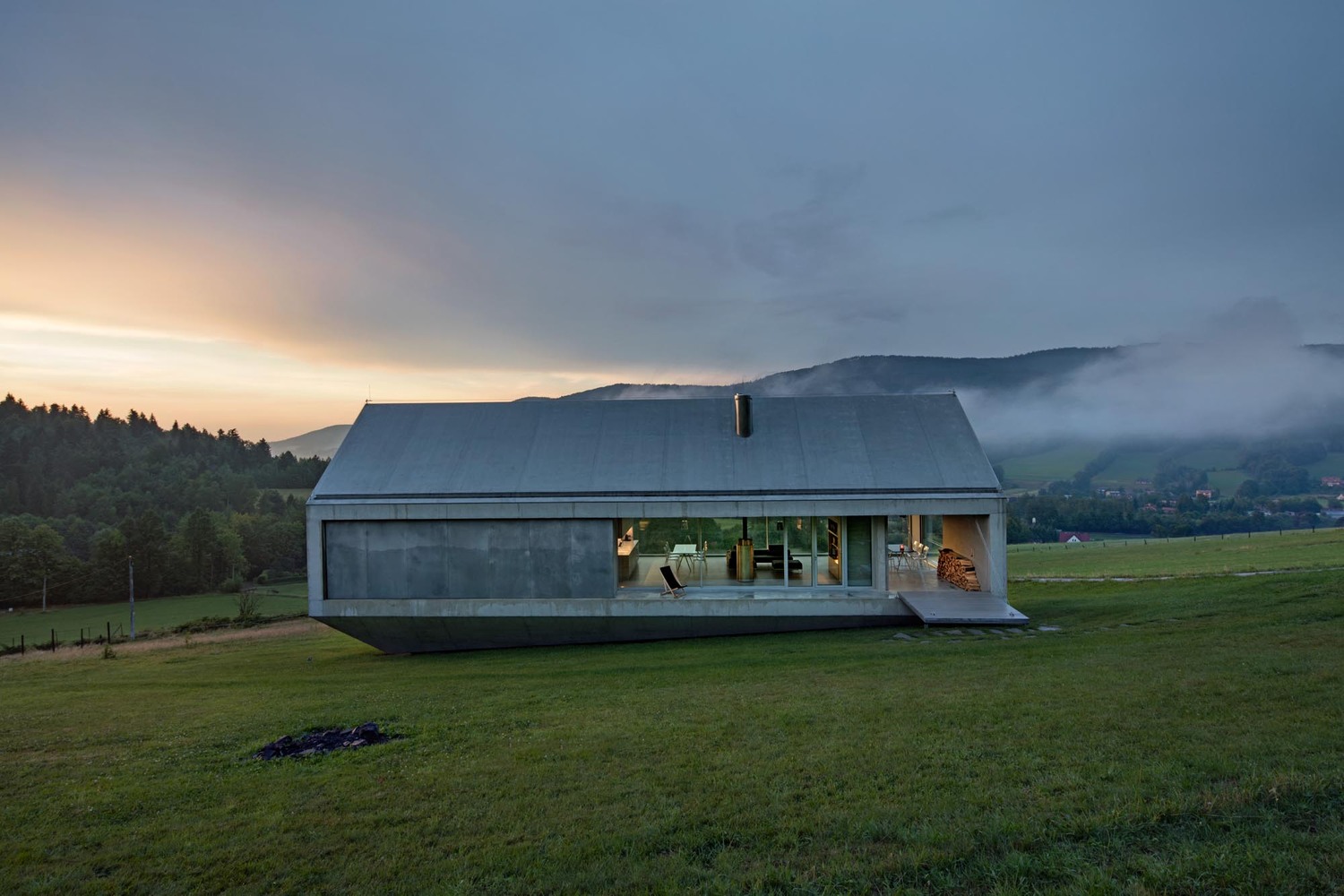 For years now, minimalism has been a major trend in architecture, interior design, visual arts, writing, and lifestyle.

This post will introduce you to minimalist architecture, exploring its definition, history, elements, and benefits.

What is Minimalism in Architecture?

The simplest way to express the concept of minimalism in architecture is with this phrase:

Indeed, this phrase has become the motto for the entire minimalist movement in architecture and beyond. But we can trace its origin back to German architect Ludwig Mies van der Rohe.

Minimalists believe that excessive ornamentation is distracting and that if we pay close attention to the essential nature of a building site, the light, the seasons, and other natural elements, they will tell us how to construct a simple, streamlined structure that can respect that environment and make the most of it.

The result is a building that exists in harmony with its site and its occupant, enhancing the quality of life and work.

No ornamentation is needed, because the site and structure themselves are the aesthetic focus of the design. Indeed, even space takes on an aesthetic quality in minimalist architecture.

Another phrase that is important in minimalism is:

This phrase can be attributed to architect Louis Henry Sullivan, who is sometimes known as the “father of modernism.”

His student Frank Lloyd Wright later modified this phrase to:

“Form and function are one.”

These ideas are broader than minimalism, but are certainly key in minimalist design. Wright’s version of the phrase removes what can be viewed as a false dichotomy.  Indeed, we might even say that a well-designed structure is function realized as form. Its beauty is derived as much from its conceptual elegance as it is from its shape.

A History of Minimalist Architecture

In the early 20th century, the Dutch abstract artists Piet Mondrian and Theo van Doesburg created a publication called De Stijl, which translates to “Style.” The work of these artists and others in their group was another key influence that fed into minimalist architecture.

A pioneering school of modernist architecture at the same timeframe was Staatliches Bauhaus in Germany, which opened in 1919 and operated through 1933. Indeed, the final architect to direct the Bauhaus school was Mies van der Rohe. Ultimately, the Nazi Party shut down the school, and Mies moved to America.

Over the decades since, minimalism has continued to grow and flourish. Japanese and Dutch architects, designers and influences remain prominent, but the style has spread throughout the world.

As you explore the world of modern architecture, you will discover that minimalism may be present to varying degrees. Some structures feature a strict form of minimalism that is utterly devoid of ornamentation. Other structures may combine minimalism with other styles and influences, simply “leaning” in that direction.

Sometimes you might also run across buildings that are constructed in a minimalist style, but do not feature minimalist interior décor.

Regardless, here are some of the key attributes that typify minimalist design:

In a way, minimalist architecture is deceptively simple. What we mean by that is that even though its essence is simplicity, that does not mean that creating a beautiful, functional minimalist design is easy.

It is not enough to simply create a structure devoid of ornamentation by throwing together a few geometric planes in haphazard way and say, “this is a great work of minimalist architecture.”

There must be an underlying logic and coherence for minimalist architecture to truly achieve its goals.

When that logic and coherence are present, you experience a sense of breathtaking harmony and efficiency.

What are the Benefits and Appeals of Minimalism in Architecture?

Just from reading our discussion above, hopefully you already have a pretty good feel for what makes minimalist architecture so appealing. But let’s go over the benefits in detail.

Minimalism at its best not only streamlines form, but can also help streamline the tasks involved in everyday living, facilitating your lifestyle. The cleverness of its functional solutions can be a source of joy.

2. Harmony with your natural surroundings.

Minimalist architecture can connect you to the world outside your door, keeping you in touch with nature in an industrial society. We would argue this is one of the things that makes this style anything but “cold.”

Interiors flooded with natural light are conducive to work and leisure. Even though minimalist structures often feature heavy materials like concrete, the openness of their designs tend to give them a feeling of airy lightness.

4. Compatibility with a clutter-free, minimalist lifestyle.

If minimalism is a life philosophy you embrace in general, you will find that minimalist architecture is a great choice for your home or workspace. You already are striving to cut clutter out of your life, and having a beautiful minimalist structure to inhabit can support that clutter-free existence.

While minimalist architecture can be expensive (more on that in the section on drawbacks), it at least avoids the extra expenses that go with excessive ornamentation.

6. Clean and maintain your building with ease.

For many people, minimalist architecture provides a restful sense of order, harmony, and tranquillity. This can be conducive to a positive and serene mindset as you go about your daily life. It might also help you to concentrate on your work, hobbies, etc.

8. The building itself takes the spotlight.

So often with contemporary design, a building exists merely as some walls and a roof and floor—a kind of container in which to put things, rather than something beautiful within itself.

With minimalist architecture—especially if you also are following minimalist interior design principles—the building and its artistry are the main attraction. While the structure has function, its intrinsic beauty never takes a backseat. In other words, even if form follows function, form is never forgotten.

It is also worth touching back on what we mentioned about minimalism’s harmony with the natural world.

The distraction-free nature of uncluttered geometric forms and the large windows that let in natural light allow for minimalist structures to make art out of nature itself.

A minimalist architect may, in fact, plan a building to be dynamic in nature. They might consider how shaping or angling a surface in a particular way will make use of the natural light, and how the character of a room might change as the sun moves across the sky. They could plan for a structure to convey one thing in the morning and another in the evening.

Does Minimalist Architecture Have Any Drawbacks?

While minimalist architecture has a lot to recommend it, there are still some potential disadvantages. Let’s go over them now.

1. Some building designs may not give you sufficient space for all your stuff.

Maybe you love minimalist architecture, but are not living a minimalist lifestyle yourself devoid of “stuff.” Perhaps you like your things, and do not want to give them up.

There are some great minimalist designs that offer solutions. They may feature extensive closets and cabinets that are seamlessly concealed within walls and other surfaces, allowing you to have your stuff and enjoy a clean, clutter-free minimalist interior.

But not every minimalist building offers these types of storage solutions. All too often, there is nowhere to put all your stuff. You either have to put it in a storage unit somewhere, or you need to clutter up your interior with it, disrupting the flow of your surroundings in an unattractive way.

2. It is not necessarily cheap.

Even though you will not be paying for expensive ornamentation with minimalist house design, that does not mean that minimalist architecture comes cheap. Top minimalist designers may charge you quite a bit for their designs. Depending on construction requirements, building your home or commercial structure could also add up quite a bit.

3. Some people think it looks cold and impersonal.

While minimalism has many devoted fans, there are people who walk into a minimalist interior and feel like they are in a cold, sterile environment that is inhospitable. They might even declare that it is “drab” or “boring.”

We would argue that however valid subjective aesthetic tastes may be, to some degree, this perception may be based on some misunderstanding of what minimalism in design is all about.

The intent of minimalist architecture is very much warm and supportive. The goal is for a structure to be conducive to living.

When minimalism is well-executed, it should feel quite hospitable, and there should be a sense of connection between a structure and its inhabitants.

Of course, appreciating the beauty and warmth in minimalism may require study. If you are someone who feels minimalism is cold or boring, we challenge you to spend some time really looking at minimalist structures. Perhaps you have dismissed them with no more than a cursory glance in the past. Try studying their features and appreciating the thoughtfulness of their designs. You may find yourself seeing them differently in the future.

Reading this post on minimalism, you may wonder what differentiates minimalism from contemporary architecture.

Contemporary architecture is also not the same thing as modern architecture, which dominated during the 20th century.

Modern architecture refers to an umbrella of styles such as the Bauhaus style, International Style, expressionist style, constructivist style, and so forth. Art deco usually is not included under the modernist umbrella, but streamline moderne makes for a nice bridge between the two.

If you look up the features that typify modernist architecture, you will find they include:

Sound familiar? Minimalism definitely fits squarely within the umbrella of modern architecture. These are all elements that the two have in common.

What distinguishes it as a specific subset of modernism is its emphasis on “less is more,” as we explained before. It is a form of modern architecture that strives to be as streamlined and “essential” as possible.

As for contemporary architecture, you will sometimes see examples that are minimalist. In fact, there are a lot of really stunning minimalist homes being designed nowadays.

But more often than not, what we see in contemporary architecture is a toned-down form of minimalism.

You might see elements of minimalism combined with subtle or even moderate degrees of ornamentation, for example. Or you could see a structure with minimalist bones, but a totally different style of furnishings and interior design.

It is also common in contemporary architecture to see the use of “warmer” materials like wood with traditionally minimalist shapes and lines.

Contemporary architecture puts a big emphasis on customization and mixing and matching. So, people who may be turned off by really stark minimalism may choose the elements they like and get away from those they don’t.

Conclusion: Minimalist Architecture is the Genius of Function as Form

Not everyone loves minimalism, but those who do appreciate the perfect fusion of form and function and the elegant interplay of geometric forms, space, and light.

Wherever you fall on that spectrum of appreciation, we hope you will continue to explore more about the history and benefits of this streamlined style.